Spoiler alert. The following essay examines what the ending of “The Book of Mormon” (the musical!), might really advocate. It talks about what happens in the final 10 seconds, so if you don’t already know, or you don’t want to know, then don’t read it (even though it’s given away on the cast recording!):

People who haven’t seen “The Book of Mormon” often presume, wrongly — but for understandable reasons — that the very funny new musical is a mean-spirited attack on Mormonism, perhaps the strangest and least understood among all Christian denominations.

Once they have seen it, they know this is a surprisingly traditional musical — well, for one that includes a “Little Mermaid” riff that cheerfully admonishes God, “(Bleep) you, in the (bleep), mouth and (bleep).”

But for all the gentle fun it pokes at fundamental tenets of the Mormon religion, the musical is really not an affront to Mormonism. It is instead a pointed spoof on religious literalism of any kind. It is a witty, heartfelt testament to anyone who has undergone a crisis in faith, and come out stronger for it.

Or is there more to it than that?

By the end, the story’s affable young Mormon Elders have tickled our sensibilities to such an adorable degree that you might not think too much on the very last line of the night … which, upon further review, just might be the most subversive line in a musical that’s filled with them.

Forget Mormons: Do writers Trey Parker, Matt Stone and Bobby Lopez have a much larger target in mind? Because that last line sounds a lot like an advocation of atheism. And if it is, this precocious little musical might be a whole lot more subversive than any of us have ever really given it credit for. Because it’s one thing to pick on Mormons. When you start talking atheism in America, there are a whole lot more hornets in the nest.

But is that what becomes of our two teen protagonists in “The Book of Mormon”? Let’s consider what happens:

In the play, Utah teens Kevin Price and Arnold Cunningham are sent to Uganda for their two-year missions, where their primary charge is to baptize as many Africans into the faith as they can. To date, the Mormon branch has converted exactly zero in this  drought-, disease- and war-ravaged land where God seems remarkably absent. But Elder Cunningham, a portly teen with a penchant for making things up when he’s nervous, proves to be a wiz at winning over the natives — even though he’s never actually read the eponymous “Book of Mormon” (the New Testament sequel that Joseph Smith dug up from his upstate New York backyard in 1823).

That’s because young Cunningham makes (bleep) up as he goes along, changing sacred Biblical stories and updating their messages with modern pop-culture references that give relatable relevance to Africans suffering from AIDS, dysentery and starvation under a warlord who orders that all woman’s genitalia must be mutilated. Some believe the organ that brings sexual pleasure to women is the root cause of AIDS. Others believe the cure for the plague is having sex with a virgin, even if that virgin is a baby. This is not the writers’ envelope-pushing creative license; this is present-day African reality.

So you can understand why the dusty pages of a strange and foreign scripture would have no urgency to these Ugandans. That is, until Elder Cunningham offers a desperate, embellished variation of the sacred story, one that  promises God’s wrath against anyone who commits genital mutilation or has sex with babies. And he uses  characters from “Lord of the Rings” and other pop-culture standards like “Star Wars” and “Star Trek” to spice the story up.

It’s hilarious stuff. But while Arnold’s story gets through to the natives and offers them hope for eventual delivery from their daily miseries, it also gets the Ugandan chapter shut down by Mormon leaders. The missionaries are, in effect, exiled. But while Elder Price still considers himself a Latter-Day Saint, his epiphany comes when he realizes it’s OK to change some things, and it’s OK to break the rules. “Even though we have complete doubt that God exists,” he says, “we can all still work together and make this our paradise planet.” Not exactly Mormon doctrine.

And that’s what they do: They commit to a new Ugandan mission focused on service. In the very funny final scene, the missionaries and the villagers alike come together for a new kind of door-to-door evangelism. But the book they are selling is (and here’s the spoiler) … “The Book of Arnold.” Take that and your golden plates, too, Joseph Smith.

In the end, Mormonism has been not just been gently tickled — it’s been pretty much repudiated. It’s out, replaced by a hip but clearly invented fable advocating a patently made-up god. And the idea of these boys embracing a self-created God? That’s … a whole lot more radical than just poking fun at Mormons.

But that’s nothing new. By embracing a hybrid, new-and-improved kind of Mormonism, these young missionaries are just following the historical evolution of Christianity.  For thousands of years, Christian faiths have splintered and mutated for the same reasons these boys splinter off from the Church of Jesus Christ of Latter-Day Saints. Rebels didn’t like one aspect or other of the Catholic church — a belief in the absolute authority of the Pope, say, or differences of opinion on how man can attain salvation, and voila … we have the Protestant Reformation, Lutheranism, Calvinism, Episcopalians and so on.

(Note: Here’s a helpful interjection on this point from my childhood friend Matt Miller, pastor of First Presbyterian Church in Sioux City, Iowa:)

First, if you’re charting the splintering evolution of the larger Christian church, the first comes with the Great Schism between East and West, Constantinople’s rivalry with Rome for primacy. Second, Luther and Calvin ARE the Protestant Reformation (no one outside the academy really talks about Zwingli, but he was in there too) … at least they started it. Luther mostly, who influenced Calvin. And you have to know that the Anglican church started as a power grab – Henry didn’t like the Pope. Their official story is that they are the “middle way” between Luther/Calvin and Rome. The interesting parallel to me from what you’ve written is that one of the hallmarks of the Reformation was the way in which the printing press made it possible for Christians to read the Bible (if they were literate) in their native tongue. Before that, most Christians were like Elder Cunningham – they had never read their own book. And of course the most recent evolution of Christianity is the rise of the Pentacostal movement. Phyllis Tickle posed a theory along these lines in her book “The Great Emergence,” about how every 500 years the church has a rummage sale.

The point is, we modify. We embellish. We tailor. And we have been bending sacred scriptures to suit our own purposes for centuries. When I was young, we were called “Salad Bar Catholics.” And we aren’t as welcome by the home base as we once were.

After now having seen “The Book of Mormon” three times — once on Broadway and twice since the first national touring production recently launched in Denver — I now can say that I know only these four things to be true:

Could “The Book of Mormon” determine your next president?

Is “The Book of Mormon” a treatise on atheism?

“Book of Mormon” scalpers: Score on for live theater

Broadway’s Rory O’Malley: On “Book of Mormon,” Turning it Off and Shutting the Closet Door 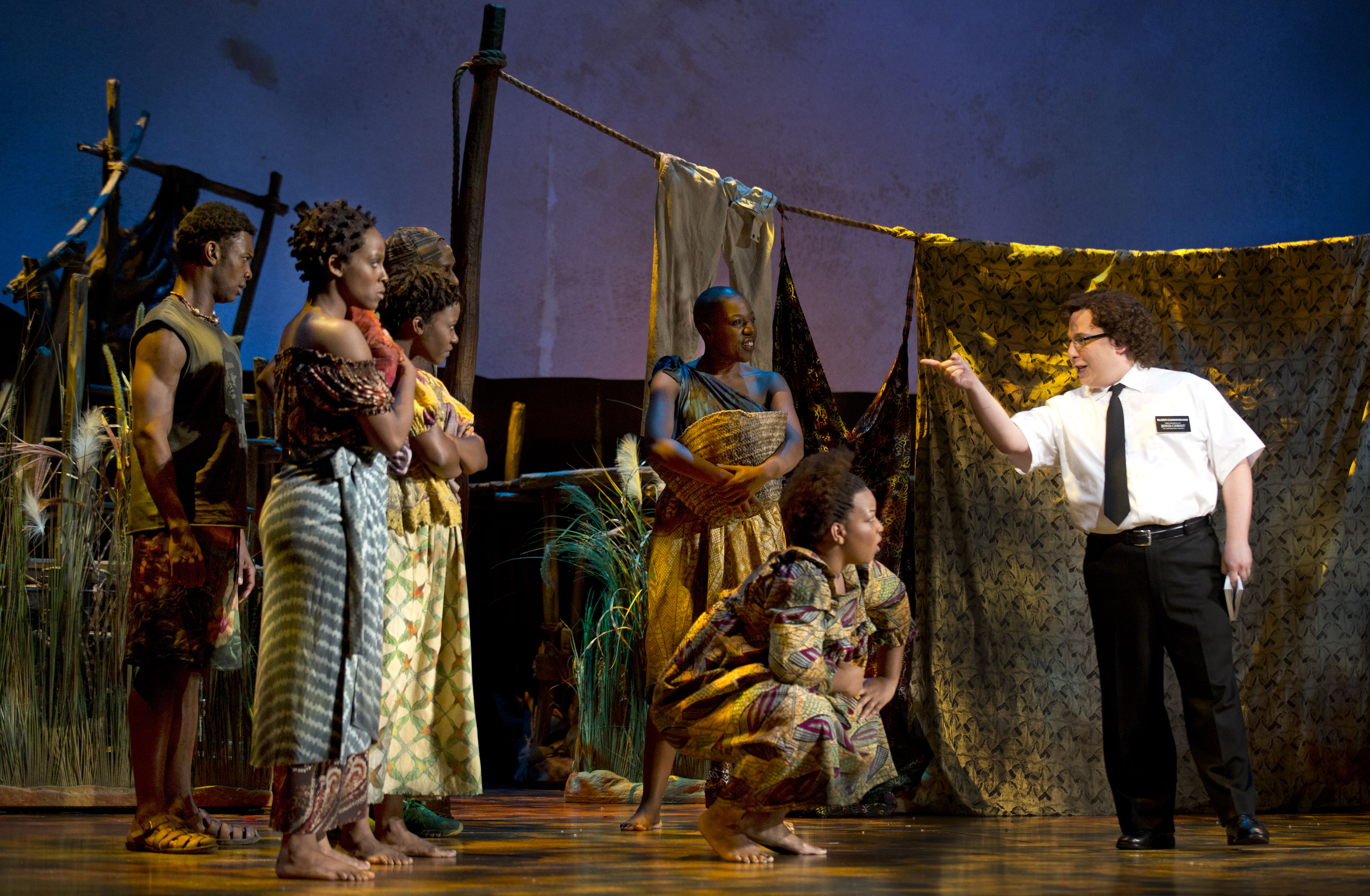 The national touring production of “The Book of Mormon,” now playing through Sept. 2 at the Ellie Caulkins Opera House in Denver. Photo by Joan Marcus, 2012