Opening No. 41, “Lilly’s Purple Plastic Purse”: “Lilly” is back for a second staging by the Denver Children’s Theatre at the Mizel Arts and Culture Center. Missy Moore is now taking on the role of the excitable mouse who stands up to bullies, can’t focus in class and is none too pleased about a new arrival in her home. Through April 28 at the Mizel’s Wolf Theatre, 350 S. Dahlia St., 303-316-6360 or www.maccjcc.org. Public performances: 1 p.m. Sundays (but not March 31 or April 14). Directed by Billie McBride. Also featuring Michael Bouchard, Brian Landis Folkins, Devon James and Misha Johnson. Masks by Todd Debreceni. Photo by John Moore for www.CultureWest.Org. Thanks to Emily MacIntyre, Steve Wilson, Tom Kobes, cast and crew.

The Wolf Theatre underwent a massive renovation last year at the Mizel Arts and Culture Center.

Missy Moore as the mouse that roars when she doesn’t get her way.

Chester the mouse learns a fine lesson in courage from Lilly and all, but, Ryan Wuestewald seems to be asking, “Why doesn’t anyone ever stage ‘Chester’s Way?’ – which is only funny if you know that was another chapter in Kevin Henkes’ series of popular children’s books.

Michael Bouchard is quiet as a church mouse sneaking up on a juggling Brian Landis Folkins during Sunday’s pre-show sound check. 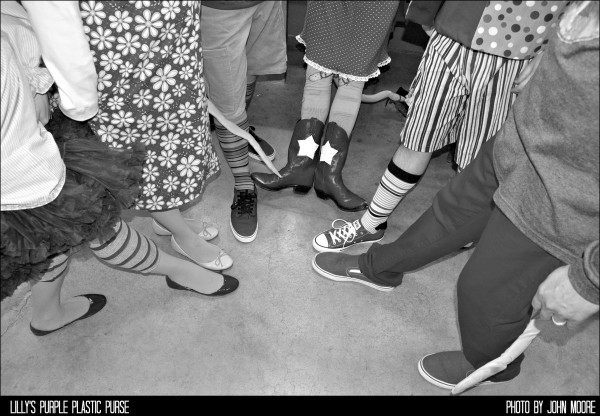 (Please click below to go to the next page of photos from our night at “Lilly’s Purple Plastic Purse.”)

Award-winning arts journalist John Moore was named one of the 12 most influential theater critics in the United States by American Theatre Magazine in 2011. His online innovations prompted the Chicago Tribune to suggest that The Denver Post‘s online theater coverage was the best in the nation. Since then he founded the arts-and-culture website www.CultureWest.Org, as well as the Denver Actors Fund, a nonprofit that raises money for local artists in medical need. He has recently taken a groundbreaking new position as an in-house, multimedia journalist for the Denver Center for the Performing Arts. Find him here: http://denvercenterblog.tumblr.com.
Posts by John Moore →